"Slingboy" or also known as "The Catapult" was originally created by the Scottish sculptor William Reid Dick  (1879 Glasgow-1961  London, England).

The bronze sculpture that is known under two different names is showing a young, nude male who is aiming his catapult at a target. Slingboy is an attractive Art Nouveau exhibit that was made during the early 1920th century.

The sculpture impresses its viewers, due to the noble material as well as the filigree and very detailed surface of the male nude. “The Catapult” is standing with a turned hip on top of a solid base made of marble and was perfected by the signature of the artist William Reid Dick. 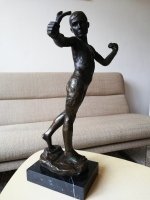